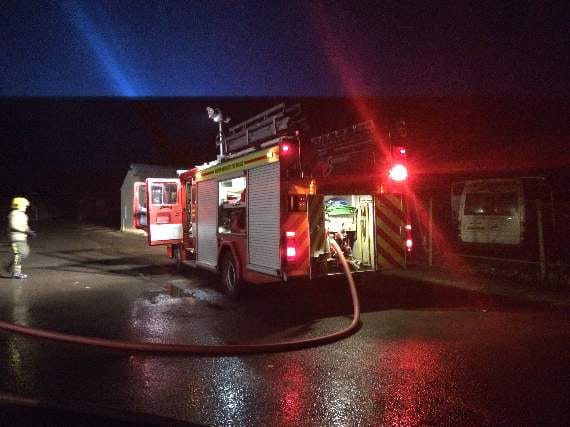 West Mercia Police have confirmed that although they are keeping an open mind as to the cause of the fire at Broadmeadow Yard in Ross-on-Wye, which started at approximately 10pm on Saturday evening, it it is believed that the blaze may have been started deliberately.--Two appliances from Ross-on-Wye fire crew were called to Broadmeadow Yard on Saturday night (January 14th) and firefighters remained on the scene until the early hours of Sunday morning.

Fire-hit village homes to be rebuilt from scratch

Compressed air foam and two main jets were used to fight the fire, involving a lorry and a cabin, both of which contained furniture.

The lorry destroyed in the blaze was used in many charity events in Ross-on-Wye; it was the float in the Christmas Carnival, and also a staging area for the Ross Country Music Festival.

Firefighters on the scene told the Ross Gazette that they have made efforts to contain the environmental impact, and they asked the Environment Agency to attend as a precaution.

The police also set up a road closure near to the scene.For the full story, please see this week's edition of the Ross Gazette.