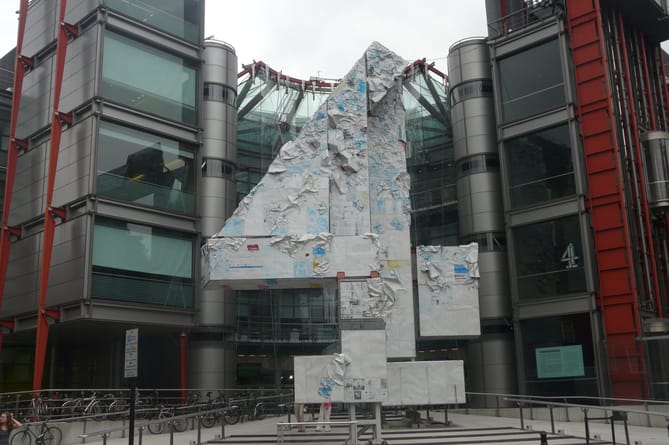 The Channel 4 logo outside the Channel 4 headquarters. ("Big 4 by El Anatsui, Channel 4 HQ, Horseferry Road" by Loz Flowers is licensed under CC BY-SA 2.0. )

A FORMER BBC, and CBC senior journalist, and a founder producer and presenter at Radio Wyvern, Graham Hughes, has hit back at Jesse Norman’s concerns on the Channel 4 sell-off.

The Gazette reported last week (June 22) on a number of questions put forward to the UK Government by Hereford and South Herefordshire MP Jesse Norman, on the privatisation of Channel 4.

One point Mr Hughes felt was overlooked, is the planned closure of all broadcast television in Europe by the end of 2034, in favour of allowing the internet to take over as the primary form of broadcasting. He added that even satellite TV from the likes of Sky is also likely to close within ten years, with future distribution by broadband only.

He believes one justification for this is the continuing decline of TV commercial revenue, as more advertising goes to digital outlets. He said that the value of C4 right now is estimated to be £1 to £2 billion; it may be worthless by 2034 unless it and other British broadcasters are allowed to adapt with their audiences.

Mr Hughes told the Gazette: “The broadcast marketplace is rapidly changing. The question now is whether the BBC and Channel 4 are too big or too small to cope with the demands of audiences, and over regulation, with the declining revenue that is available.”

He added that the choice and appeal of subscription services is too great for younger audiences to return to traditional TV. This is putting our main British TV companies in a weaker position.

Mr Hughes believes the selloff of Channel 4 is unlikely to make any noticeable changes to its public service remit, and that long term, it is more likely to save it. He said: “Jesse Norman says the privatisation of Channel 4 ‘is an unnecessary and unprovoked attempt to address a political non-issue during a time of crisis, at significant cost to the independent UK film and TV industry’. In the short term he may be right, in the long term he is more than likely wrong.”