Police made a giant bee out of guns and knives, here’s why 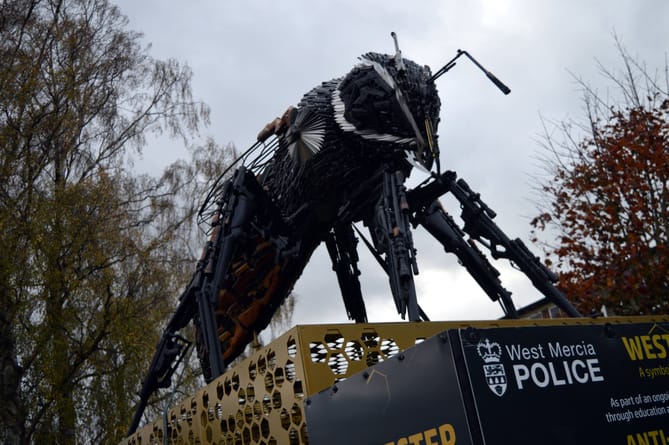 A giant worker bee made out of knives and guns

Students and staff at John Kyrle High School were greeted by a striking piece of artwork as part of a police campaign against violence.

The display consists of a giant worker bee, made entirely from guns, knives, and other weapons that were either confiscated or donated. Many of the knives and guns were confiscated by police, but a number of the rifles were also donated by armed police who had used them. 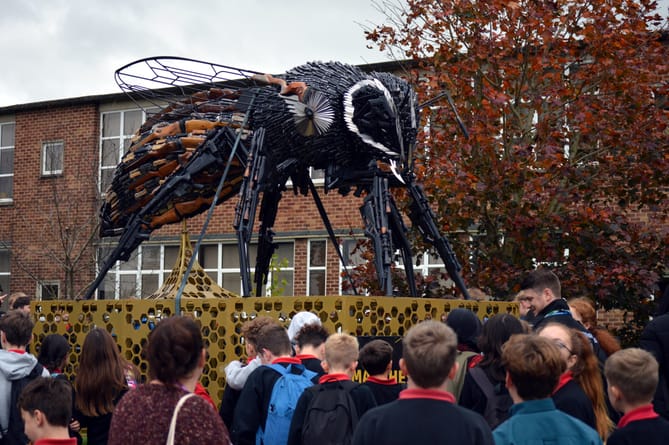 A number of students remarked that gun-violence was something they typically associate with the USA, due to their prominent gun culture, but officers were glad to educate students that whilst the UK is nowhere near as bad—and certainly not Ross—gun and knife crime is still something the police have to deal with and take seriously.

Students have been filling and wrapping shoeboxes full of generous donations

The Anti-violence Bee was created by the British Ironwork Centre in Oswestry, Shropshire, the same company that made the Knife Angel, which attracted thousands of visitors to its tour of cities across the country. It’s hoped the bee will replicate the Knife Angel’s impact but also reach more communities in the region, it has been specially designed on a trailer to allow it to be easily transported to schools and public spaces.

Two years in the making, the Anti-violence Bee was originally commissioned by Greater Manchester Police and it is made up of thousands of weapons taken from the streets of the city. The worker bee is an important symbol to the people of Manchester and was chosen to show the strength of community.

Working in partnership with local councils West Mercia Police is delighted to secure the Bee at the start of a national tour, and also to coincide with Operation Sceptre, an national operation designed to educate young people about the dangers and consequences of carrying a knife, target those who carry weapons and disrupt the sale and supply of knives.

West Mercia Police crime prevention lead, Superintendent Edward Hancox, said: “Knife crime has a devastating impact on individuals, families and communities. Carrying a knife or other weapon does not keep you safe. Instead you are putting yourself in much greater danger, and you’re more likely to become involved in a violent situation and get injured yourself.

“Having the Anti-violence Bee tour our region is a real honour, and its sheer presence will provide the ideal opportunity for us to get this message out into our communities.

“We are working with local councils, charities and schools to engage and educate our young people. The Bee will be accompanied by officers at each location as part of our anti-violence education programme.

“Our officers work daily to tackle knife crime, however the prevention and enforcement work we do is only one part of the solution. We all have an important role to play in tackling and preventing knife crime by raising awareness of the consequences and dangers of carrying a knife.

“We would encourage parents and carers to talk to their children about the hazards of carrying a knife and visiting the Anti-Violence Bee is a good way to start that conversation.”

Police and Crime Commissioner, John Campion said: “To prevent knife and gun crime, we need to start at the earliest opportunity. The statue is a sight to behold acting as a powerful visual tool which opens up conversations, particularly with children and young people, about the dangers of carrying weapons and how they can keep both themselves and their family safe.’’

“I would encourage you to visit the Manchester Bee when it comes to a location near you in November and help spread the message of safety and anti-violence throughout West Mercia.”

Officers will also be promoting Fearless, part of the Crimestoppers charity, where young people can access non-judgmental information and advice about crime and criminality.