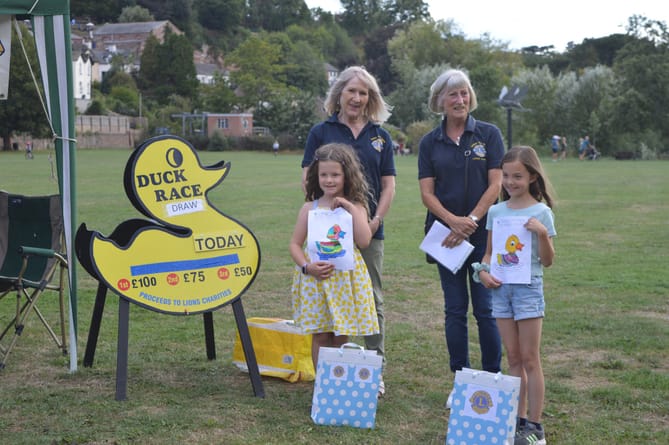 Phoebe and Daisy-mai with their award winning colouring in entries. Isabelle, Daisy-mai and Phoebe won from a total of 17 entries.

In the face of countless Ross summer events getting cancelled, tenacious Ross Lions were determined to carry on the duck race tradition, even if it had to be in a more modest way.

Newent choir back in full force

The deluge of ducks could not be released either down the Wye nor the nearby brook as river levels were too low for the stewarding canoes to direct the race, but in its place was a duck-themed raffle following the highly prestigious colouring in competition.

Winners Isabelle (age 11), Daisy-mai Newitt (age 9), and Phoebe Wilde (age 6) were the winners among 17 entries in the well-fought colouring in competition.

Ross Lions wanted to thank Ross Town Council for supporting the event, as well as everyone who bought a raffle ticket and the children who entered the colouring in competition.

In lieu of the duck race, ducks were randomly drawn from a bag, so there were competition winners. From over 1,000 entries, number 92, 401, and 934 were chosen. Winners were blindly drawn by several children who volunteered to take on the responsibility. Ross Duck Race was originally planned to happen during carnival day, but was moved to the same day as the Ross Regatta after the carnival was cancelled. The regatta had to be cancelled due to low river levels as did the duck race.