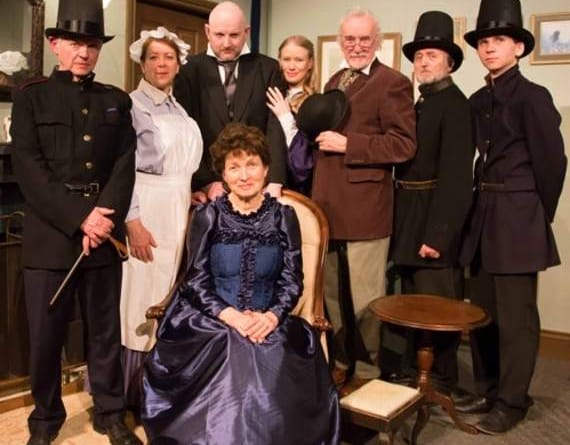 I want to start by mentioning the set for this production of Gaslight, at the Phoenix Theatre, Ross-on-Wye, as it was as much a star of the show as the cast themselves. I always feel that, due to the size of the auditorium, the audience is a silent participant in the action at the Phoenix and this was no exception. The set was everything I remembered of the old black and white film I saw many years ago. The working double doors at the rear opened to expose stairs and a hall and was used well.

The sitting room was dressed in the most tasteful manner with even a chenille tablecloth over the dining room table and a fireplace with mantle on which ornaments had been placed. On either side of the mantle were two strategically placed gas lights (electric obviously) which were controlled simultaneously as the actors turned the lights up and down; timing and acting in perfect sync.

The lighting was just right, adding to the atmospheric gloom that the title depicted.

The small cast moved the play along at a great pace. Amanda Smith convinced me that, as Bella Manningham, she was a wife who was slowly going mad because of the devious machinations of her manipulative and menacing husband, superbly played by Gareth Wigg.

New notice board for the Ross branch of British Legion—but wait, there's more

Walkers invited to chart their routes on the "Wikipedia of walks"

See the full story in last week’s edition of the Ross Gazette, or subscribe to our online edition here