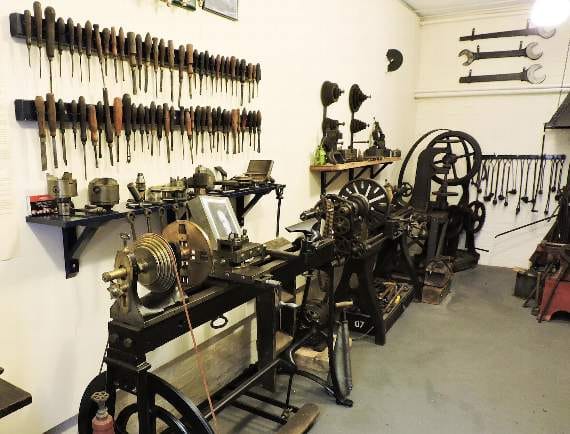 Until being mothballed in the 1990’s, the boreholes at Alton Court - to the east of Ross-on-Wye - supplied the town with water for around 100 years.

This Easter the Waterworks Museum in Hereford is celebrating this historic supply with the opening of a new display room at 2pm on Sunday, April 1st.

In the story of philanthropy and public service in Ross the name of Alderman Thomas Blake is often stated alongside that of John Kyrle (the ‘Man of Ross’) as amongst the most revered in the town. Less well known to many is Henry Thomas Blake, the Alderman’s nephew, and the water engineer who was entrusted with delivering his uncle’s vision for a potable water supply for Ross, which he managed for many years.

To be officially opened by Mary Sinclair Powell is a new display room at the Museum called the Old Workshop. The centrepiece of the new display is the treadle lathe on which Henry Blake had turned taps and fittings for his water engineering business in Ross, and for the Ross Fire Brigade, which he captained for many years. The lathe, together with a large collection of tools and ancillary pieces, was a most generous donation by the grandsons of Henry Blake, who have also loaned the Museum a display board of original taps made by Henry in the 1880s.

With the exception of Hereford, the Museum has more engines and pumps from Alton Court than from any other location. For this reason, Ross has been chosen for the first in a series of events focussing on the historic water supplies to Herefordshire’s market towns.

On Sunday, April 1st and Easter Monday, April 2nd, the Waterworks Museum will be open between 12-4pm (including the Children’s Heritage Water Park).