Peter is going ‘Above and Beyond’ for hospital 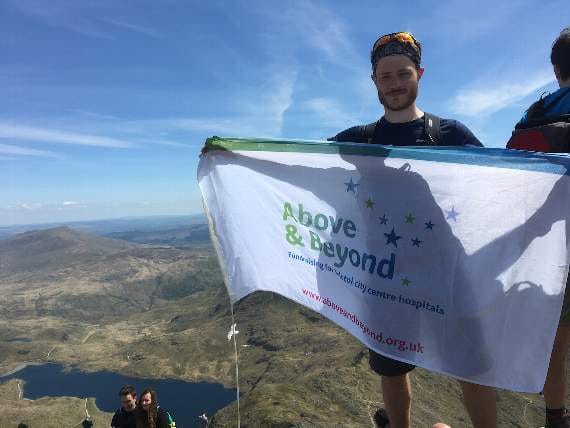 Symonds Yat man, Peter Lamb, underwent two major heart operations at Bristol Hospital before he was 13 months old. Now, at the age of 25, Peter has given up his job and undertaken some huge challenges to raise funds for the Bristol Heart Institute Appeal, Above and Beyond.

Peter was born in Gloucester Royal Hospital in 1993, and diagnosed with congenital heart defects within the first week. Peter still has a check up every two years but is generally fit and healthy now thanks to the care he received at Bristol.

His treatment there inspired him to give something back. He started with a three-day cycle ride to Paris to run the marathon in April, and then continued to cycle to Snowdon, Scafell Pike and Ben Nevis, climbing the three peaks, and taking in the Edinburgh marathon, which he completed on May 27th. Peter told the Ross Gazette that training for his first marathon was very hard. He said he had never run a marathon before, but had done a lot of cycling. His most recent trip to Edinburgh had been even harder. He was cooking for himself and camping on the way, so as well as competing at the event he had to carry all his equipment with him.

He plans to cycle across Europe next and, between June and November, will be taking part in five more marathons, including Budapest, Zagreb and Istanbul.

He wants to continue taking on persal challenges and finds that fundraising gives extra motivation. He said his best moment so far was when he knocked 24 minutes off his Paris time, and that was after cycling 900km.

The worst time was probably during that cycle ride when he had to cycle for 12 hours and got very tired. He said: “It was relentless.”

Peter, who attended Whitchurch Primary School, and John Kyrle High School before studying at Leeds University, is home for a few days before moving on to the next stage.

Peter hopes that telling his story will inspire others to ‘go for it’. He said not everyone is in the position to quit their job and do something on a such a large scale but if anyone is thinking of running 10k or a half marathon they should start training and do it.

His diary can be found on Facebook (Pete Lamb - running and riding in Europe). To donate to Peter’s fundrasing page you can visit