REVIEW: A great party at the Phoenix Theatre 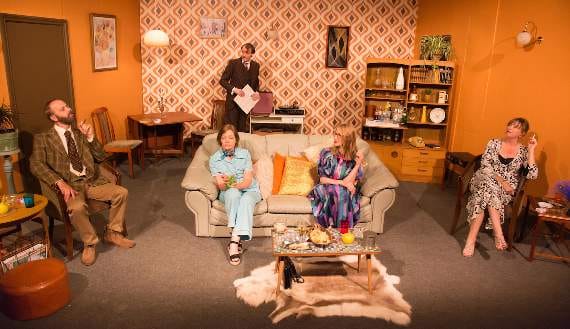 A review of Abigail’s Party at the Phoenix Theatre by Rachel Divine.

The Phoenix Theatre Company recently staged a revival of Mike Leigh’s classic play Abigail’s Party. The play is a satire on the aspirations and tastes of the new middle class that emerged in Britain in the 1970s and made Alison Steadman, who played Beverly, a household name.

Beverly, a would-be social climber, and her estate agent husband Laurence have invited new neighbours Angela and Tony over for drinks together with Susan whose daughter Abigail has taken over her house for a party. The gin and tonics and cheesy pineapple chunks are being passed around and Jose Feliciano is on the record player. As the evening progresses tensions escalate exposing the marital strain between Beverly and Laurence. Susan’s anxiety surfaces as Abigail’s rock music permeates the room. The evening culminates in hilarious and embarrassing revelations.

Reprising a well-known play is fraught in that comparisons with the original will always be made, even though 40 years have passed since the first broadcast. The Phoenix Theatre Company avoided direct comparison by bringing a fresh interpretation to the play under the astute direction of Renee Field. Key to the originality was the role of Beverly, played with absolute conviction by Sandy MacNeill.

The dynamics with her down-trodden husband Laurence, played by Tom Lee-Hynes, were in marked contrast with the palpable sexual chemistry between her and ex-footballer, Tony, played by Phil Field. Although he had very few lines, his one liners in reply to his socially inept wife Angela, were heavy with sarcasm and had the audience in stitches.

Michelle Cooper played Angela to perfection, aided by the simple addition of goofy glasses and heavy lipstick, and had the audience cringing at her naive comments. Abigail’s mother Sue, played by Lucy Davies, is in the middle of the sparring couples and has to endure being force fed with gin and tonic, cheese nibbles and a cigarette whilst being quizzed on her divorce. Beverly’s and Laurence’s interests are poles apart. Whilst Beverly likes to swoon to Jose Feliciano and Elvis, Laurence on the other hand, prefers classical music and attempts to engage Sue in a conversation about art, much to the annoyance of Beverly. As the evening wears on the tensions reach boiling point when Beverly goads Laurence with an erotic painting he hates.

The final scene is superbly played out with enormous energy by Tom Lee-Hynes who eventually collapses with a heart attack. Although a trained nurse, Angela’s attempts to revive Laurence are futile and, to the strident chords of Beethoven’s Fifth emanating from the record player, the play ends with Sue on the phone shouting “Abigail, Abigail!”

Mention must be made of the set which, with a backdrop of gaudy wallpaper, a room divider and a fibre light, shouted 1970s at us.

This was a stunning piece of theatre where an old play was brought to life with great effect and further enhances the reputation of the Phoenix Theatre Company.