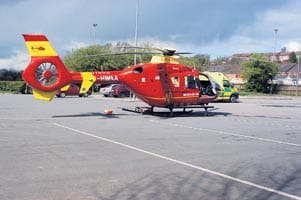 Traffic was diverted from Ross, at the Wilton Roundabout, to Symonds Yat on Easter Monday, April 9th after a two vehicle collision led to the westbound carriageway being closed.

The vehicles involved were a Vauxhall van and a BMW car. Two fire crews from Ross and a crew from Monmouth were called to the scene at 1.30pm and helped to free an injured woman from the van. They also helped to make the vehicles safe after the patients had been taken to hospital. An off duty paramedic was also on hand to help.

Another passenger was taken to Nevill Hall Hospital at Abergavenny by land ambulance. Three other patients were treated at the scene but were not taken to hospital.

Ross Library is having its next event this evening, Wednesday, October 5

The A40 westbound lane was closed until 7pm and there were major delays reported by motorists travelling from Ross to Monmouth.

The police helicopter tweeted at 17.50 that they were obtaining aerial photographs of the accident.

This was not the only incident which resulted in the Air Ambulance crew being called out at the beginning of this week.

The first call was on Monday, April 9th at about 11am. The Air Ambulance was called to transport a 30 year old man who had sustained a suspected broken leg while playing football. He was taken to Worcester Royal Hospital.

Then on Tuesday they were called to a residential home in Ross to help a patient with a medical emergency. The helicopter was reported to have landed in the grounds of the Chase Hotel.

Later that day, Tuesday, April 10th, at 1.07pm, the helicopter was seen again over Ross. A man had been reported to have collapsed with chest pains in a van in the car park at Homs Road. Crowds gathered as the man was airlifted to Worcester Royal Hospital. A member of the helicopter crew warned people to stand back as it took off.