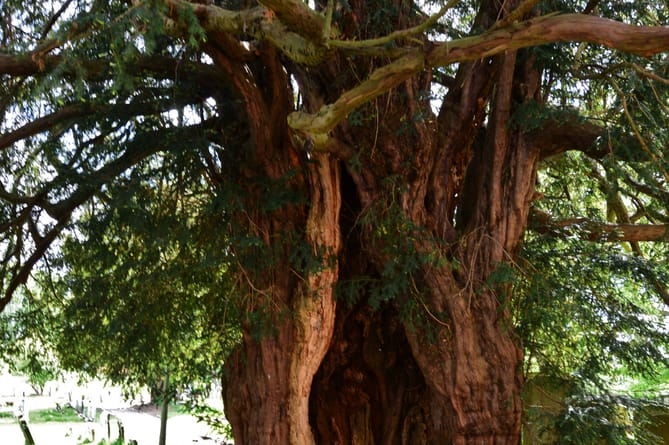 The Much Marcle yew is among 70 trees dedicated to Her Majesty the Queen. Pic: Michael Garlick.

A 1,500-year-old local yew tree has been listed amongst 70 ancient trees to be dedicated to Her Majesty the Queen in celebration of the Platinum Jubilee.

The yew has a huge hollow which is unusual to see for an ancient maiden yew. Within the hollow there are two benches and—in the past—parish notices were often nailed inside the tree, serving as a community notice board.

In July 1953 the tree was measured by the Reverend Graham Holley—who was rector from 1967 to 1994—and Sir Ernlie Kyrle Pope. At four-and-a-half feet from the ground it measured 30 feet, 1 inch. The tree was re-measured in April 2006, where it was found to be 30 feet 11 inches—measured at the same height. The parochial church council have a certificate stating that the tree is 1,500-years-old.

It was pruned around 15 years ago, where it was estimated that about six ton of dead timbers and unnecessary branches were removed. The project took 45 hours and resulted in more than eight trailer loads of rubbish.

By sharing the stories behind the ancient woodlands and trees—as well as the incredible efforts that are made to protect them—the Queen’s green canopy aims to raise awareness of these treasured habitats and the importance of conserving them for future generations.

The ancient tree dedication marks the start of a long-term project to ensure that the genes and unique characteristics of some of the UK’s most important trees are preserved.

Throughout her reign, the Queen has planted more than 1,500 trees all over the world and has spoken alongside Sir David Attenborough on their importance. People are being invited to plant a tree for the jubilee, to create a legacy in honour of the queen’s leadership of the nation.