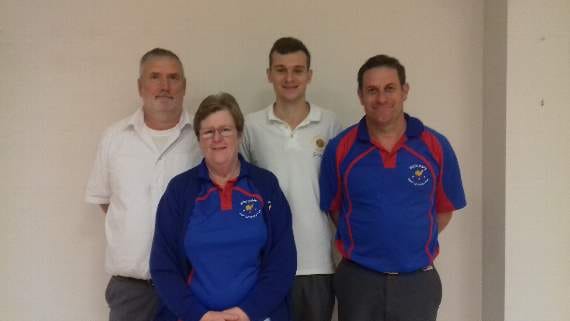 The first of this season’s County Championship competitions took place at Ross Bowling Club when 12 teams contested the County Fours.

After a round robin stage and a quarter final knockout the field was reduced to 4 teams. Ross had two teams through to the semi-finals. The Ross team skipped by Les Williams came up against a strong team skipped by Joe Loveys, and comprising two players each from the Gorsley Chapel and Woolhope clubs, who proved too strong and progressed to the final with a 10-6 victory. In the other semi-final Phil Jenkinson’s Ross side, comprising Sue Dix, Gwen Lambert and Bernard Glover, fought out a very low scoring match with Nic Lloyd’s Fownhope four but emerged with a hard won 6-2 victory to take their place in the final. The Gorsley / Woolhope side, however, proved too strong for the representatives of the host club and Joe’s side, containing Shirley Cox, Dean Rudman and Anthony Rogers, took the title with a 9-4 victory.

The County Premier team has made a good start to the Inter County Championship, winning home and away against Avon and suffering the narrowest of defeats in matches at home against Gloucestershire and away to Oxfordshire. Each of these latter two matches rested on an umpire’s measure on the last wood of the last end, Herefordshire losing out each time and losing each match 22-18. The A team have played only two matches in their group so far, suffering away defeats to Northamptonshire and Shropshire in a tough qualifying group.