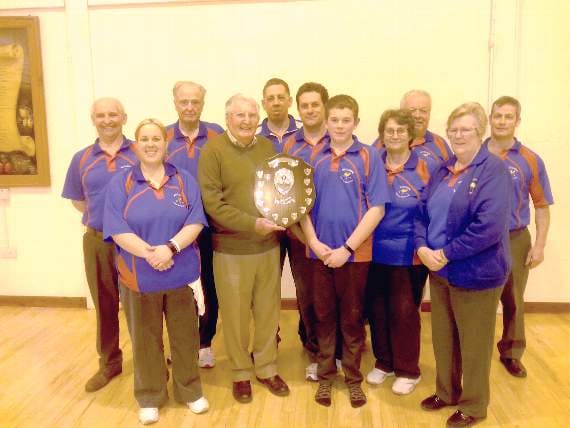 Woolhope have made it two consecutive victories in the LEH Trophy, the knockout cup competition contested by short mat bowls clubs across Herefordshire and Gloucestershire.

The final, which took place at Upton Bishop Millennium Hall, was a repeat of last year’s all Herefordshire affair, contested between Woolhope and Ross, with both sides having tasted semi-final success against Gloucestershire opposition. Woolhope’s semi-final against Westbury-on-Severn had proved to be a comfortable victory for the Herefordshire side, but Ross had encountered much more of a battle, defeating Longhope by a slender two shot margin across the two-legged match.

The first session of the final saw Ross get off to a good start with the Singles being won by Ross’s Ian Park by five shots against Anthony Rogers, and a very tight Pairs match ending in a draw.

A splendid buffet supper was then served to players and spectators courtesy of the efforts of Rita Hancock before play resumed for the final two disciplines.

Becci Cox’s Woolhope Triple started strongly and established a good lead in their game, whilst Ross, skipped by Les Williams, were going well in the Fours.

The second half of the session saw something of a reversal as Ross closed the gap in the Triples to only four shots by the end of the game, leaving the match result resting on the Fours which was the last game to finish.

Ross held a slender overall lead with two ends to go, but Dominic Rogers’ team ended the game strongly to give Woolhope wins in both second session disciplines and an overall four shot match victory. This victory meant that Woolhope achieved their fifth win in the competition, matching Ross’s overall record of victories.

The tournament sponsor, Norman Allen, presented the trophies and thanked all of the organisers and helpers for their efforts.