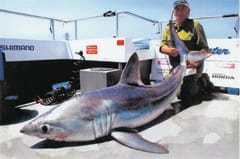 HE'S a man of the countryside, who many years as a ghillie helping umpteen fishermen land a fish on the Wye and beyond. But now George Woodward, 70, of Coppett Hill has landed his own fish, so big it has blown existing Welsh records out of the water.

Despite suffereing from seasickness, and swearing never to set foot on a boat again, George accpeted an offer to go shark fishing off the Pembrokeshire coast in June. The weather was glorious as they headed for rich fishing grounds midway between the Welsh and the Irish coasts. Soon George's fellow fishermen were getting bites, first a blueshark at a healthy 60lbs followed by another at 70lbs. When George dipped his rod, however, he quickly had a bite, but little did he think he would still be there two hours later trying to haul his catch in. No one on the boat had any idea of the size of it though the Goliath battle, at one point completely pulling George to one side, indicated George had caught someting special. "I put as much pressure as I could on the fish, but by an hour and a half I had had enough," said George, who harboured a childhood dream to go shark fishing one day.

For the full story please see this week's Ross Gazette.