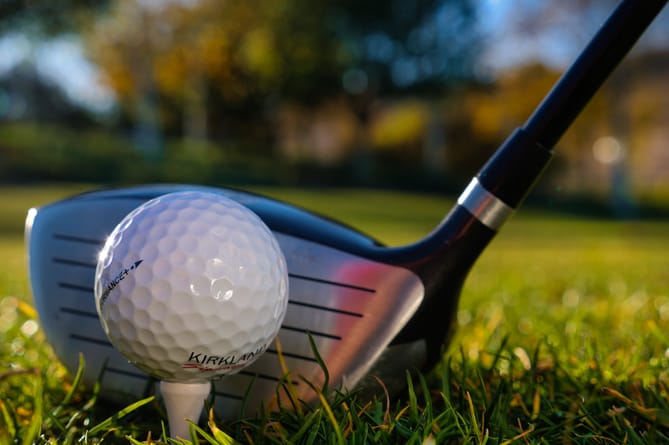 There was a good turnout for this drawn pairs competition. Breezy conditions didn’t prevent some good scores in what turned out to be a keenly fought contest. Only five points divided 2nd to 10th place. With the best score to count on each hole, Trevor Horsfield continued his remarkable form and dominated the scorecard for the winning pair. Will Shotton dovetailed perfectly with him to put together an unassailable 51 points. Mike Weller was on sparkling form to make the runners up spot safe for him and his partner Phil Barnes with 47 points. Only one point behind was Peter Bubb who teamed up with Peter Clark for third place.

Ladies are showing lots of drive

Robin rolls back the years

A group of elite athletes from the Seniors section ventured over the Severn Estuary for a good day out on Monday 23rd May. Balanced teams of mixed handicaps were able to plan their strategies over bacon butties. The view from the clubhouse over the estuary and both bridges was stunning, unlike the sense of direction shown by Roger Barnes and David Rippe who left their team captain after the second hole to go on safari. Exotic species aside, the course was in good condition and, with a brisk breeze, proved a challenge for those unfamiliar with its layout. Plenty of water and wide bunkers added to the task.

Ian Corbitt mastered the conditions best of all and won the individual prize with 38 points. He was followed by Jon Davies in second with a creditable 35 points. The team competition, best 2 scores out of 3 proved a much tighter proposition. The top 5 teams were divided by a single point with the best three all on 75 points. Will Shotton, Brian Carver and Geoff Hardwick pipped the other groups on countback. The presentation was made to the winners after an enjoyable two course meal.

Thanks to all who took part.

On Thursday, June 2, the Section sent a 12 man squad to play against the Seniors of the gorgeous Woodlake Park near Usk. It was a beautiful early summer day with hardly a breath of wind and fabulous views towards Abergavenny and the reservoir.

The course was in excellent condition, but the only excellence was on the part of the home side who won by 5 games to one. The greens were very fast and some of us had trouble adjusting. Many holes sloped severely on the fairways, and the home side (although very helpful with guidance for those of us who hadn’t played there before) had a great advantage in that respect. We all enjoyed each others company and had a well-deserved meal together after play finished. We play the return match at home on June 16.