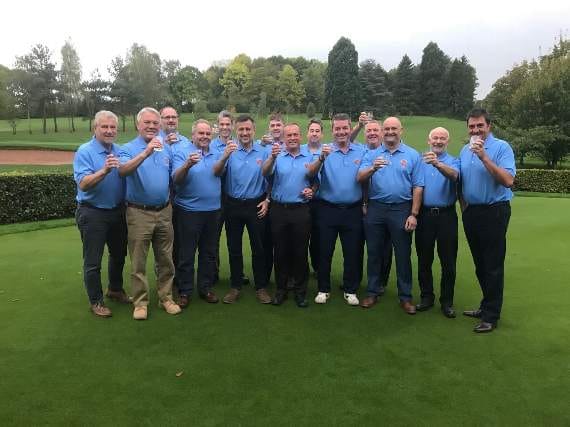 To enable their more accomplished male players to compete at the highest level when representing the Club in matches, the Gorsley-based Ross Golf Club is affiliated to the North Glos Foursomes League even though their course is situated in Herefordshire.

Another trophy for Andy

For the first time, a competitive ‘B’ team league was formed for the 2019 Summer season, and the Ross Club found themselves in Division 1 by dint of their ‘A’ Team competing at the same level having being crowned NFL Champions in 2018 under the Captaincy of Neil Lancett and Coach, Head Professional Tim Hall.

Who better qualified then to Captain the Ross Club ‘B’ team in matches now that two points were at stake for every match, than Mark Whitmore? The golfer’s exemplary care and shrewd man-management of the ‘B’ team squad in friendly affairs had always spoken for itself, and so it proved once again.

In the ten matches, played on a home and away basis in 2019 against Minchinhampton, Forest Hills, Lilley Brook, Cirencester and Broadway, his 12 players team playing the four Ball Better Ball format won seven and halved one match to amass 15 points and deservedly be crowned Champions of the inaugural North Glos Division 1 ‘B’ Team League, with the Minchinhampton Club runners-up with just 11 points.

Two fine away wins at Broadway and Cirencester, and a halved match at Minchinhampton, played a big part in the final results table as did the ‘collective spirit’ among the 26 players that supported Mark throughout the season. This was typically reflected by Mark commemorating the achievement by providing engraved whisky tumblers for each squad member, with many qualifying for a commemorative team shirt as well. The squad can look forward confidently to the 2020 season in Division 1 with Mark again at the helm.See this week’s paper for more stories like this, available in shops and as a Digital Edition now.