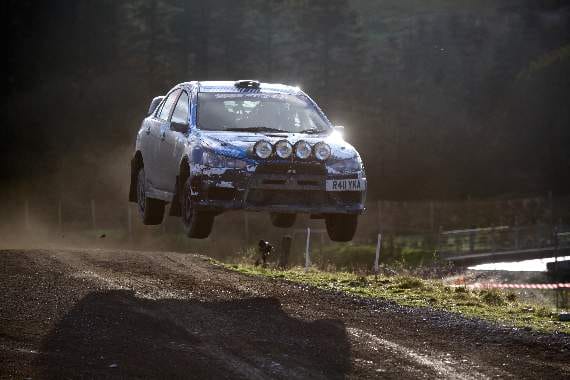 However, this year also saw two local crews taking part, with Sacha Kakad and James Aldridge in the Westbase backed Mitsubishi Evo 10 and Scott Partridge, with Keegan Rees on the notes, in their Subaru Impreza

This year’s event offered 21 high speed tests totalling some 305 kms in tough slippery, foggy conditions on some of the world’s best gravel roads.

Friday offered six tests in the Mid-Wales Forests of Myherin, Sweet Lamb and Hafren, which had to be completed twice.

Thousands of spectators welcomed crews as Evans stopped the clocks fastest by 3.7 seconds, from fellow Brit, Kris Meeke in his factory Citroen C3 WRC after 28kms of Myherin

It was an eventful day three for Partridge with the loss of launch control, brake issues and fog on Aberhirnant. He spent most of the stage in second gear. For Kakad it was a case of enjoying these classic stages moving up to 40th overall.

Sunday’s final leg was only 42 kms in five tests. However, the forests of Alwen, Brenig and Gwydir are notoriously tricky, but that’s all that stood be­tween Evans and a piece of history.

Neuville took the last stage win to consolidate his second place overall from Kris Meeke, the Citroen driver finished a disappointing seventh overall, third quickest and third place was enough for Sebastian Ogier to clinch his fifth WRC driver’s title, and also help M-Sport clinch the manufacturer’s crown, For both Kakad and Partridge it was left to make it to the end, with Kakad 40th overall and 25th in class, Partridge 54th and fourth in Nat 4 class out of the 65 survivors who reached Llandudno

This year’s event yet again lit up the Welsh forests and has been enjoyed by spectators from around the world.