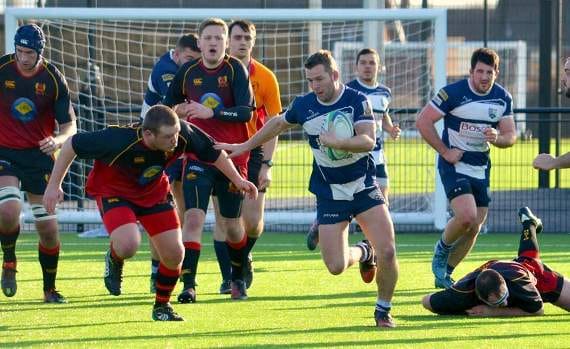 Ross travelled to Bristol last Saturday knowing that a bonus point win would see them promoted.

With six games of the league season remaining, they duly delivered, running in tries seeing off a hard working Bishopston side, 78-15.

It was the home side who were out of the blocks first, dominating territory and possession for the first quarter. After a series of sustained attacks they opened the scoring with a try wide out on the left, taking a 5-0 lead.

Ross however did not panic and hit back within minutes, as some quick hands by AJ and Matt King put winger Marcus Barnard in space and he outpaced the chasing cover defence to score in the corner. Fullback Thai Hayward then nailed the touchline conversion to put Ross 7-5 ahead.

Hill down Ross in opener

From this point at the end of the first quarter Ross did not look back, tries came at regular intervals, as the set piece of scrum and lineout delivered quality ball.

Ross played at a pace and tempo that the hosts could not contain. Marcus Barnard added another three tries to take his match tally to four, centre Dan Field got a hattrick, Gavin Oates got two, and Alex Davies, Josh Element and a penalty try completed the twelve scores. Thai Hayward converted nine of the tries, seeing Ross comfortably to the final whistle with a 78-15 victory and promotion, as third place side Bream can not now catch them.

On Saturday, February 24th, Ross take a break from league action as they entertain Redditch in the North Mids cup semi final at Greytree. Kick off is 2.30pm, come on down and support your local team, entry is free.