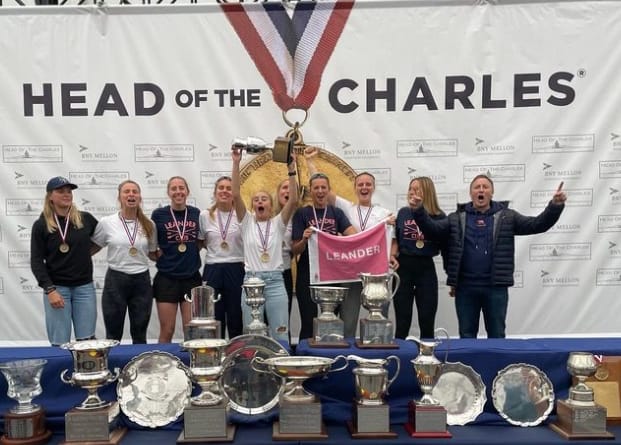 WORLD champion cox Morgan Baynham-Williams added another triumph to her impressive CV as she steered her club boat to the championship women’s 8s title at the biggest rowing race in the world.

The Ross RC member jetted to Boston USA with Leander Club to join 11,000 other rowers competing at the three-day Head of the Charles time-trial, which attracts crowds of 225,000 to the riverbank to watch nearly 2,000 boats race.

And following success at the world championships in the Czech Republic, Henley Royal Regatta and European 8s silver in Munich, she urged the crew to overhaul US college stars Pennsylvania in the last half-mile of the 3-mile race to win by just 1.27 seconds.

The Leander boat were two seconds down on the clock at half-way, and the gap remained at the penultimate time marker, reached by her crew in 12 minutes 41.8 seconds.

Ivell pulls strings as Phoenix rise to challenge to down Painswick

But the 2016 Oxford Women’s Boat Race winner steered a brilliant line in the closing stages and got every last drop out of her exhausted crew mates to take more than three seconds out of the US boat in the last 750m, coming from behind on time to win in 15 minutes 14.2 seconds.

The Henley-based Leander Club were described on the competition’s website as “a small, historic British club”, despite being world rowing’s oldest and most successful club ever, with more than 120 Olympic medals to its name,

And Morgan, who steered the GB PR3 mixed four to world glory in September in a new world best time, and her crew of Flo Donald, Ruth Siddorn, Sophia Heath, Daisy Bellamy, Isabelle Hawes, Isobel Powell, Juliette Perry and Susannah Dear added another win to the honours board by heading a 29-boat field that included the cream of US Ivy League college rowing, such as Penn, third-placed Washington (15.20.9) with Cardiff’s Angharad Broughton on board, Brown, Princeton, and Yale, alongside the Danish national squad.

Starting towards the back of their field, Morgan had to plot a path past several slower boats, and her excellent coxing combined with the crew’s pure grit saw them surge through in the closing stages.

And the Paris 2024 hopeful posted afterwards: “Another excellent experience racing @hocr1965 last weekend. Loved being one of many formidable woman’s crews leaving it all out there on the track!”

It was her second rowing trip to the States this year, following a 1/2L victory in a GB women’s 8 over Washington last Spring to lift the Windermere Cup.

Leander’s Chief Women’s Coach, Ross Hunter, brother of 2012 Olympic champion Mark, said: “The Head of the Charles is such an iconic event and to be part of it this year has been amazing.

“The athletes have performed superbly and I hope these results bring pride to all our members around the world.”

You can see video of Morgan’s crew racing on her Instagram page.

She also rowed in several races with Monmouth members as more than 3,000 competitors from some 50 countries launched out in 4,365 boats at the annual veterans event, including former Olympic and world medallists.

Racing over a 4.5k course from Barnes to Putney, the duo covered the distance in 14.56 to win by five seconds from their own schoolmates, with only two adult women’s boats in front.