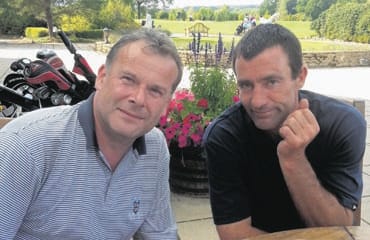 The final day was played on Friday, September 6th over 27 holes taking in the Blue, Red and Yellow course. Price and Dribble were hot favourites and came up against Mike Jones and Russ Brett from the Forest of Dean.

Price and Dribble are current Ross trophy holders and the pair out drove the Forest team by three clubs on the opening holes; they displayed techniques that Brett and Jones could not match, but after 18 holes the honours were even and the final 9 played on the testing Yellow course was about to take its toll on the Ross pair. Their driving advantage evaporated as fitness began to play its part and Dribble was falling behind off the tee. In the end it was a crushing six hole winning margin for the Forest stalwarts, a victory of tenacity and determination over misplaced self-confidence. Brett and Jones said they were delighted with the win.