Unbeaten start to the season 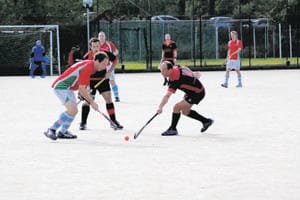 Last season's promotion into the De Cymru & Marches 2 League means this season, Ross will compete against bigger hockey clubs against teams from far flung places such as Cardiff, Whitchurch, Swansea, Aberystwyth, Gloucester and Cheltenham; a chance to mix it with the bigger boys.

The opening game of the season saw Ross travel to Bourton and Sherborne. Early on, Ross came close to opening the scoring, however, a long pass forward, saw the Ross defence torn apart and the unmarked Bourton striker struck a fierce shot leaving the Ross keeper no chance. As the match approached half time Ross started to find an urgency. Two goals in quick succession both scored by Phil Evans gave Ross the lead.

In the second half, Bourton equalised but goals by Tom Walton, Adrian Ridgeway and Adrian Williamson took Ross into a commanding lead. Bourton's managed was only a consolation in response as Ross sealed a 5-3 victory.

Ross's second game was at home against Llanfair and Caerphilly. Ross allowed the visitors to retain the ball within their own 25 yard line, making it difficult for the Llanfair and Caerphilly defenders. However, when the ball was eventually passed forward, Ross pressed the ball, forcing the opposition to lose posession. Ross created several good chances, none of which were converted. At half time score remained nil-nil.

The Ross half time team talk must have been memorable, because Ross came out flying, scoring two quick goals. The first when a shot rebounded off the keeper to Adrian Williamson, who calmly placed the ball in the back of the net. The second Ross goal came from a penalty corner. Richard Jennision injected the ball, Tom Walton with the resultant drag flick, deflecting off into the net.

With two wins from the opening two matches Ross can hopefully take a degree of confidence into their next match, an away fixture against current league leaders Cheltenham B.

And finally, a big thank you must be offered up to the sport centre's resident first aider, who manfully administered first aid to Kristian Franklin. This followed a fiercely driven clearance stricking him, at close range, in the unmentionables, bringing him to his knees and causing every male person in the vicinity to collectively wipe a tear from their eyes.