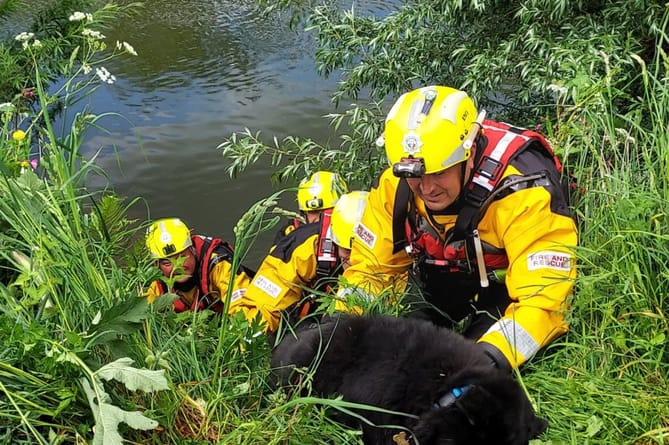 The rescue of a dog who had fallen down a riverbank near the Ross canoe launch was greeted with enormous gratitude from his owner.

Dorothy Bernado and owner Jeff Hills were walking half-husky-half-labradoodle Artimen along the river walk near the bandstand last week. At some point during the walk, Arti was no longer returning when called. After 30 minutes of searching, panting was heard from a place on the riverbank, leading Dorothy and Jeff to where Artimen had fallen on to a lower band near the edge of the river and was unable to get back up on to the field, as the bank was too steep.

Two women—who were paddleboarding in the area at the time—tried to assist in helping Arty back up but were unable to do so.

After every possible effort was made to rescue him, Dorothy and Jeff felt like there was no other option than to call Hereford and Worcester Fire and Rescue.

Fire-hit village homes to be rebuilt from scratch

The fire and rescue service were incredibly prompt in coming out to offer assistance, arriving only 10 minutes after the call.

The rescue team—consisting of five fire and rescue staff­—used a line of rope to climb down and retrieve Arty.