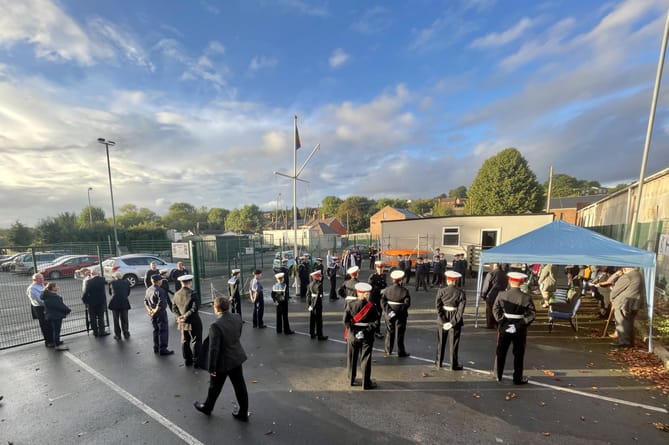 Ceremonies at the Ross and Monmouth Sea Cadets (September 8) were disrupted, when Her Majesty’s Lord Lieutenant of Herefordshire was forced to withdraw because of the sad passing of Her Majesty.

Ross Library is having its next event this evening, Wednesday, October 5

Chairman of Herefordshire Council instead opened the new facility for the Royal Marine Cadets and oversaw the change of command of Ross-on-Wye and Monmouth Sea Cadet Unit.

The cadets were on parade and all the other guests had arrived and were waiting expectantly for Her Majesty’s Lord Lieutenant to arrive when a phone call was received explaining that he could no longer carry out any official duties on Her Majesty’s behalf in light of the recent announcement of her passing. The ceremony of colours went ahead with the flag being returned to half mast; the chaplain then led a prayer.

Cadets were inspected: the Royal Marine Cadets by the chairman of Herefordshire Council, the Sea Cadets by the mayor of Ross and the juniors by the Deputy District Officer Lt(SCC) Adam Whitehead RNR.

The chairman of the unit Lt Cdr James Williams RNR then invited the chairman of Herefordshire Council to unveil the plaque commemorating the opening of the new accommodation.

Those looking to join the organisation as a cadet, training staff member or trustee are invited to inquire in person on a Monday or Thursday evening at Homs Road. More information sea-cadets.org or by contacting [email protected] or call 01600 772810 or 07968 932533.